Icecream in the Thermomix

I know I know.  Its no longer the season for ice cream you say.  Well, I have a sneaking suspicion there is someone out there who thinks, like me, that ice cream is a food for all seasons, not to be restricted to just a few warmer months in the year!  And its a great base for incorporating fruits and flavours of the season - quince, rhubarb, mandarin, apple, pear, caramel, cinnamon, star anise in the cooler months and berries, stone fruits, mango, lychee, lime, mint, in the warmer months.
Having made my own ice cream on and off for many years now after purchasing an ice cream maker back in my early twenties, it was always quite a process, making the custard base then having to wait for it to chill before churning it and chilling again.  Now I can be quite impatient but when my oldest son, Liam, started helping me in the kitchen (with much enthusiasm) I pulled the old ice cream maker out and suggested we make some, knowing full well his patience wouldn't stretch to cooking, chilling and then churning before he could taste the fruits of his labour!!  So it got me thinking of a more simple recipe.  I've tweaked it here and there to get it to a result I am now really happy with!  Now prior to my Thermomix purchase, I was using a blender which was giving me an ice cream that had good viscosity for the first night or so after making it but then seemed to get too hard to scoop after that, and would often crystalise.  Enter the Thermomix!!  The unmatchable power in the whipping action of the Thermomix has now provided me with an ice cream texture that matches that of any commercial ice cream, Sara Lee, Connoisseur, you name it.  And with only 4 ingredients!
I've put the basic recipe below (and flavour ideas below that!) and although you will get to know that I generally cook by my senses rather than measurements, I have tried to quantify the ingredients for you.
Oh and perhaps now is a good time to say that I believe everything is good in moderation!  So yes you do use full fat cream and condensed milk and yes condensed milk does have sugar in it but this is something you eat a small amount of and savour it! And probably the best thing about making your own ice cream, just like anything, is that you know what is in it and you are avoiding all those nasty additives.  OK, now for the recipe! 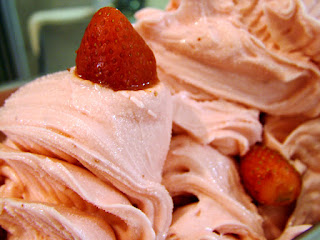 
500ml cream (I just use the thickened stuff but I'm sure the pure cream would work just as well)
1 tin condensed milk (I tend to use slightly less than a whole tin but the sweetness level is up to you)
2 eggs (free range organic give a lovely rich, creamy colour and are obviously the more ethical choice)
1-2tsp vanilla extract

1.  Secure butterfly into Thermomix jug.  Add all ingredients and whip on speed 4 for a few minutes (2-3) until you get a thick, glossy consistency.
Keep your eye on it to avoid over-whipping and curdling it/turning it into 'butter'!
2.  Prepare your ice cream maker according to instructions and pour mixture into the machine.  Churn as per manufactures recommendations.  I have an old Philips machine which I set on the soft serve setting and let it churn until it really starts to labour (probably 10 minutes past when the light starts flashing).
3.  Work quickly to get the ice cream out into a freezer proof container and place immediately in the freezer.
It can be served immediately or leave to set even more for a few hours.

If you don't have an ice cream machine you could freeze the mixture after its time in the Thermomix and once quite firm but not frozen solid, take it out of the freezer and cut it into rough pieces, quickly blending it again on speed 7 or 8 for 20 seconds then return to the freezer.


1.  Any fruit, chopped roughly or pureed - your choice.  Just be mindful that due to the high water content in most fruits, a degree of crystalisation will most likely affect the ice cream.  The fruit can either be mixed through the ice cream in the mixing process or afterwards the fruit can be swirled through before placing in the freezer.
2.  Go for some texture by smashing up some nut toffee (easily made yourself) and good quality chocolate and swirling through.
3.  Apple crumble - saute some diced apples with brown sugar and cinnamon until soft but still holding shape.  Chill and stir through ice cream.  Just prior to serving sprinkle over crumble (mix oats, shredded coconut, flour, butter and raw sugar into small clumps.  Scatter onto paper lined baking tray and bake in 180 degree oven for 10 minutes or until browned.  Allow to cool then break up into a crumble consistency)
4.  Toasted coconut and banana - Place shredded coconut on baking tray and place in 180 degree oven until browned.  Alternatively brown in frypan.  Cool.  Stir through ice cream with small chunks of organic banana.

Promote your Page too

My Favourite sites and blogs

Mel Makris
Melbourne, Australia
Everything about me screams food, food and more food!!! I have always worked with food, studied food (I'm a nutritionist) and even before I was working or studying I was cooking up a storm in the kitchen as a young child. I guess you could call me a social and professional FOODIE! My latest recipe development project is hot off the press - a recipe booklet for the McKenzie Foods fantastic legume product range. Receive your free copy of 'home made' by contacting McKenzie Foods on +61 (03) 9398 4011